Afghanistan is the red headed stepchild of American politics right now-nobody knows what to do with it, but it's not going away. I don't really want to think about it either-there aren't that many options, and what's worse, all of them are lousy.

I can't help but think back and wonder what would have been different if the former President had not shifted our focus to Iraq in 2002. But that's old news-things would be different if Meade pursues Lee after Gettysburg, or if John McGraw signs Jose Mendez in 1920, or if Washington can't escape off the Brooklyn Heights.

Sullivan says it well, and I agree:

"And, to be honest, I have every confidence in this cabinet and this general and this president will do the best they absolutely can. And while we shouldn't stint in criticism, we should allow them some lee-way in an immensely difficult and fateful call."
Posted by Unknown at 11:13 PM 4 comments:

Tune Josh Beckett, who was adequate, to be charitable, in his final regular season outing. Boston's bats exploded, however, especially a VMart grand salami that helped power an 11-6 win. Boston's regular season ends tomorrow with one final game against Cleveland, and then the playoffs begin either Wednesday or Thursday in Anaheim.
Posted by Unknown at 10:29 PM No comments:

In another game that counts for historical accuracy only, the Red Sox beat the Indians tonight, 6-2. Dice K showed signs of life, with 6 decent innings, and V Mart and Jason Bay had two hits.
Posted by Unknown at 11:10 PM 2 comments:

Hard To Know What To Say

The Phil Nugent Experience: The Roman Arena
Phil Nugent, this time, on Roman Polanski:
"I don't think that people would support this kind of use of their tax dollars and the police's time if Polanski had robbed a bank or maybe even if he'd killed somebody, but throw in "anal rape" of a child, and many people would probably all for seeing him torn apart by hungry bears in the Thunderdome on live TV. I'm not sorry for Polanski. I don't think his talent gives him license to rape children. I don't even, I swear to God, support the rape of children by anyone. But the Los Angeles County Justice Department is performing an expensive, international operation that I doubt it would like to try to justify on the grounds of protecting and serving the public, all because it got its shins kicked. They feel that they can get away with what they want to do because there are certain crimes that set off such a light show inside the skulls of most people that, if they're told what they're seeing is in reaction to one of those crimes, they'll forgive the law anything. So did John Yoo."
Posted by Unknown at 10:37 PM 6 comments:

With the postseason roles all wrapped up, Boston finally righted the ship tonight, Jon Lester and friends spinning a three hitter at the Cleveland Indians for a 3-0 win.
Posted by Unknown at 10:27 PM 2 comments:

Game 158: The Not Ready for Prime Time Players

With David Ortiz surrounded by a cast of characters widely known at their own dinner tables, the Red Sox fell to the Blue Jays at Fenway tonight, 12-0.
Posted by Unknown at 10:35 PM No comments:

The Phil Nugent Experience: Safire Is What Closed on Sunday Night
Posted by Unknown at 7:23 PM No comments:

People Smarter Than Me, Part MCMLXXXVI

Here  is a much more measured and reasonable look at the Polanski thing.

Dr. Joyner says:
"And, while I’m generally dubious of putting old men in jail for crimes they committed decades earlier and have shown no propensity to commit again, I’m rather loathe to reward confessed child molesters for fleeing the country."


I think that is the most reasonable thing to conclude. Polanski is no danger, clearly, to anyone, and finally punishing him doesn't accomplish anything. Now, if there is something wrong with his trial, he can challenge it. But there is something just wrong about him being a free man that, in my zealous pursuit of not being conventional, I was ignoring.

"The point is not to keep 76-year-old Polanski off the streets or help his victim feel safe. The point is that drugging and raping a child, then leaving the country before you can be sentenced for it, is behavior our society should not -- and at least in theory, does not -- tolerate, no matter how famous, wealthy or well-connected you are, no matter how old you were when you finally got caught, no matter what your victim says about it now, no matter how mature she looked at 13, no matter how pushy her mother was, and no matter how many really swell movies you've made."

Thanks to the Angels' win last night, the Red Sox, despite their best efforts to lose it, backed into a playoff spot.

Game 157: You'd almost rather get kicked in the head

At Fenway tonight, the Red Sox took it on the chin again. After our friend Cowboy Clay gave up home runs to everyone but the Toronto batboy (the visitors clouted six, three by Adam Lind), Boston managed to climb back into the game. A five run eighth brought the Sox up to 8-7, but no closer, as the Bostons fell again.
Posted by Unknown at 10:40 PM 1 comment:

Sometimes you have to give it up

Sometimes, you have to give it up for Pierre Robert, radio renaissance man of the Delaware Valley, who managed to play U2’s “I Will Follow” as I got into the car today to go to work. It was the rollicking, angry, live version from “Under A Blood Red Sky” that reminded those of us who came across them as of the Joshua Tree album that they could still kick out the jams when they wanted to.


Bill Simmons(@sportsguy33) , on “The BS Report”, noted that he had received feedback from readers, when he mentioned his pal JackO’s journey to a U2 show in Foxboro, amounting to, “Who cares, old man. U2 is over.”. That is an interesting response-U2, without any question one of the most famous and successful bands in rock and roll, is now seen (by young people, I assume), as a bunch of old fogeys.

I guess, in a sense, they are right. U2 has been making music since the early 1980s, and they are still making records and touring 30 years later. Rock N Roll has always been a Kill Your Idols kind of thing, and personally, my musical taste is pretty stuck. There are very few groups that I enjoy today that I didn’t enjoy in, say, 1990. I never used to be that way, but at a certain point, I just stopped caring so much about new music.

The Roman Polanski case is making all sorts of hay, especially on Twitter. Polanski is a supposedly gifted film director (I haven’t seen his films, and even if I had, I am in no real position to know) who fled the US after becoming involved in a rape case. From what I am able to understand, the victim does not want him tried, but the case is still open. The authorities in Switzerland have picked him up and are preparing to send him to the US to face justice.

All I know for sure is that I don’t know what he did, and neither do you. I also know that rape is a terrible crime, one of the worst things a person can do to another.

Kurt Vonnegut wrote a novel, “Mother Night”, about the effort to track down a Nazi after World War II, and the self righteousness of the pursuers in that book remind me a little bit of the people on Twitter climbing all over themselves to say how terrible a person Roman Polanski is.

He may indeed be a terrible person.

I'm not condoning anything or justifying anything, I just wonder how much is accomplished by trying an old man for something that happened decades ago.

NPR’s “This American Life” this week was another economic show, “Return to the Giant Pool Of Money”, following up on reporting they did about the economic crisis. I think it’s an excellent program, and well worth your time. I would especially like DMarks to listen to it and explain to me again how this is all Fannie Mae’s fault.
Posted by Unknown at 10:13 PM 4 comments: 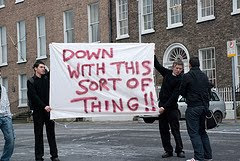 It's Not That Simple

This article from Slate is very interesting. Pediatric cardiologist Darshak Sanghavi writes of health care as a marketplace, and more appropriately, not as a marketplace.
Posted by Unknown at 9:05 AM No comments:

Game 156: When The Easy Part Is The Hard Part

Someone should probably let the Red Sox know that if they want to win the Wild Card, they should, y'know, maybe WIN.

Tonight at Fenway, in a rain soaked parade of blah, young Michael Bowden, an emergency fill in for ailing Josh Beckett, got rocked by the Blue Jays, who won 11-5. The game was called after 7 innings, but was over long before that.
Posted by Unknown at 11:09 PM No comments:

In Yankee Stadium today, Boston took a brief 2-1 lead, looking to salvage something, anything, out of this dog's breakfast of a weekend. But then Paul Byrd realized he was Paul Byrd, and one Matsui RBI single later, it was 3-2 and the Yankees finished off a series sweep.