Velvet Verbosity's 100 Word Challenge will neither confirm nor deny whether it intends to run for president in 2012. This week's word is "forgetting", and this story is called "Who Are You?"

"What is it?" Steven said from the bed. She didn't turn around.

Tara fervently wished it was. That, she could understand. Simple, straightforward guilt, she could grasp. Tara could take the stolen afternoons in the hotels under another name, the hours and days without any contact, the knowing glances of the maid. That came with the territory.

The part she hated was the way it turned her against herself, making her forget all the times she condemned others for doing what she did so easily.
Posted by Unknown at 10:07 PM 5 comments:

The final 52/250 Flash is up, and while I am not in the mix, the stories and poems therein are not unworth your time.
Posted by Unknown at 9:36 PM No comments:

The marvelous Velvet, who is more marvelous than a sausage sandwich, is leading some of her minions on a journey through Julia Cameron's book "The Artist's Way". As such, we (Velvet's zombie army) will be conducting weekly check ins, as the book instructs. This is week one's check in.

1. I did not do any "artist pages". (Cameron suggests you begin each day with free writing for 30 minutes in a notebook.) Mornings are tough for me- we're often trying to get three people to three different places, making it hard to find 30 minutes for anything.

2. I did not do an "artist date". I took several unscheduled trips, places like Target and OfficeMax where I can browse pens and paper and think for a while.

3. Probably the most significant issue I came upon this week was writing a non fiction piece for my buddy Matt Potter's magazine Pure Slush about my father's passing in 2009. It was a lot harder than I had imagined it might be.
Posted by Unknown at 5:43 PM 4 comments:

The IndieInk Writing Challenge is upon us, with a mean girl in a garage challenging me to write about "The Virus". (My challenge goes out to some random girl, who will respond to it here.)Which, I have to admit, is a challenge so good it's actually a little hard. Sometimes a challenge sets me on one path, and there's nothing I can do about it. Challenges like this, though, present a whole menu of possible avenues, and the challenge is to settle on just one.

I think about all sorts of things when I hear the word "virus", some professional and technical, and some artistic and dramatic. I think of Ed Harris' stricken artist in the movie version of Michael Cunningham's "The Hours", and of Keith Haring, and of Freddie Mercury, and of the doomed strivers in Jonathan Larson's incomparable musical "Rent". I think of reverse transcriptase, and vaccinia, and varicella, and H1N1, and tobacco mosaic virus, and the undercover nature of viral replication- using the cell's own machinery to produce more virus. I think about zombie and vampire movies, and novels like Steven King's "The Stand", and Michael Crichton's "The Andromeda Strain", and the novella that became the film "I Am Legend".


I watched the smoke make little curlicues and bends and loops as it rose from the tip of my cigarette. I met a woman, a Chinese artist who was premed before she gave up on that to make art, at a party once. She told me that the patterns in smoke like that are demonstrations of chaos theory- you could take two identical cigarettes, and light them with identical matches, and they would burn totally differently- there are so many variables, and variables impacting variables, that the system is impossible to predict. I didn't know what that meant, but it sounded good. After she bummed a cigarette and smoked it, she went back inside, while I just stayed on the porch the rest of the night, thinking about that. Jacob hated that.

Jacob. Lover, friend, comrade, brother in arms. He hated my smoking- hated it from the very beginning, insisted that I do it outside, even when he wasn't around. He could be downright bitchy about it, frankly- constantly begging me to quit, imploring me to get the patch, or gum, or hypnosis, or acupuncture. Anything to get it out of my body, and the smell out of his life. I started out of a sense of artistic yearning- that was what artists did, right? They smoked. It made you look young, and cool, and edgy, and unconcerned with mortality. Pollock, Rothko, Warhol, Picasso. "All those artists are dead," Jacob would sniff, and walk away, waving his hand theatrically.

No point in stopping now, I thought. I sat on the fire escape, looking out through triangles of steel and sharp angled buildings at the night sky. It was my smoking refuge, but sometimes I used it to just think. I'd take a novel out here- Proust, which I laughingly promised to finish as a promise to Jacob I wouldn't die- but I never read, just staring at people walking by on the street or someone on the phone inside an apartment across the street, bickering with a lover or consoling a friend. Jacob always asked me why I never made any progress in the book, and I could never tell him the answer- remembering someone else's memory was just as hard as remembering your own.

That makes Jacob sound whiny and controlling, and he's really not. I should be kinder. After all, if there is a God, I'm going to be seeing him soon. I should try to be nice. After I found out, he immediately insisted I had to stay, disease or no disease. He could have insisted, once I stopped going out with him, and then stopped working and thus, inevitably, stopped being paid, that I had to go home to Momma. I still suggested this to him, once or twice a week- my Mom would love to have someone to fuss over again- but Jacob always demurs. I secretly think he relishes having the dying boyfriend- makes him the center of a lot of conversations, which is exactly what he likes.

As it was, I wasn't costing him much. A few packs of cigarettes, a bottle of wine once a month. I only picked at food now. He had started right away, as soon as we knew, trying every trick in the book- greasy fast food, gourmet cheeses, pastry, fresh bread, homemade soups from Food Network chefs- to get me to eat. But just like my desire to paint, my desire to eat vanished soon after finding out. Part psychological- why start something you won't finish, or maintain a body that has failed you-and part biological, my shutdown was final, beyond reasoning. A few crackers, a cigarette, some water, and then back to bed, a cycle I would follow several times a day.

Sleep was a distant illusion. Fortunately, I had lost enough weight that my climbing in and out of bed barely stirred Jacob. All I could manage was a couple of uneasy hours, drifting in and out of consciousness, before some pain or other symptom- dry mouth, nausea or other stomach miseries, intense, full body itching that caused me to rub my skin raw with fury- would bring me to awareness again.

Sitting here, watching a cigarette burn , I wonder about how I got it. They tell us not to- you don't ask a cancer patient how they "got" it, so you shouldn't ask us, either. Which risky, stupid, lust filled assignation was it? Would an identical me, presented with the same opportunity, knowing what I know now, act differently? The proper answer was yes- of course, I would do anything I could to avoid the infection. The true answer? No. I was a prisoner of my loins, like all men.

The cigarette stops burning, with a final, sad, silent puff that quickly wafts away. With this invader inside my body, subverting its machinery, perpetuating itself at the expense of me, everything seems pointless. I could crawl up over the railing, hurl myself into space, feel a rushing of air, then a crunch, and then nothing at all. But that would just create a mess for someone else to clean up. That would annoy Jacob- my last act being to ruin some poor young policeman's morning. Better not, I decided, getting up to go back inside.
Posted by Unknown at 10:54 AM 9 comments: 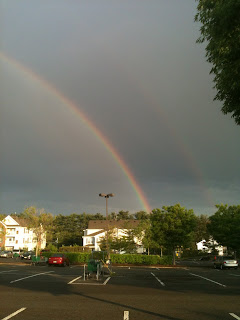