Posted by Unknown at 7:31 AM No comments:

Rob Neyer reminds us that baseball's immortals will not last forever.
Posted by Unknown at 2:34 PM No comments:

I may, indeed, be cracking under the strain.

A very funny Gilbert and Sullivan parody, dealing with the fabulous NaNoWriMo, National Novel Writing Month, which rears its lovely head Moanday, November 1.
Posted by Unknown at 10:21 AM 1 comment:

Warming Up On Flash Fiction Friday

This is my Flash Fiction for 52/250 this week. The theme was "Tombstones", and, as you will see if you read it, I went in a direction you might not necessarily have expected.
Posted by Unknown at 10:10 AM No comments:

The Best Five Players Born On My Birthday

The fine folks at Wezen Ball have a little list on their site today of the best 5 baseball players born on each day of the year, so you can look up the best five players from your birthday.

Doghouse Riley Explains It All

Doghouse Riley, who is even more hardcore than Phil Nugent, with a cogent preview of next Tuesday's election:


"Y'know, no one's gonna goad me into defending Democrats, but Reality is a different matter. The Democrats aren't in whatever situation they're in (election results are a week away; maybe we can wait that long to count the votes) because of hubris; they're where they are because they've been running from Ronald Reagan for thirty years. They found themselves, last January, with two bad choices: a compromised healthcare bill, or a failure to deliver on the healthcare promises their landslide President had made. Surprising at least one observer (me, who expected them to fold yet again), they took option A. They are now blamed for this; had the vote gone the other way they'd be blamed for that. And they are to blame, because even if they couldn't see which way the wind was blowing they could've checked in with 1992 again. They didn't lose those fights through supreme self-confidence. They lost because they thought they could win by refusing to fight. It's stupid, and when you see a crowd of ostensibly smart people doing something stupid--assuming that surprises you in the least--you look for some ulterior reason. And that reason is they're still running from Ronald Reagan thirty years later. They're afraid to propose the United States of America spend money on programs that benefit anyone other than the wealthiest 5%, for fear of being called Tax n' Spenders, and they're afraid to cut the astronomically absurd "Defense" budget for fear of being called unpatriotic. They're afraid to make corporations pay fairly, and in full, for their benefits and for the sound operation of a free and just society, and they're afraid to make them pay for shipping American jobs overseas. They're afraid of Roger F**king Ailes. They're afraid of using the system to their advantage the way Republicans do without blinking, and they're afraid of their own constituencies. They're afraid of Ben F**king Nelson and Evan Bugwit Bayh. Mostly they're convinced, and have been for some time, that electability is more important than being right or doing what's right, and they're convinced that corporate donations are more important than defending a belief system."

Posted by Unknown at 4:25 PM No comments:

So it's not a cell phone, after all. Sigh. I liked it better when I didn't know.

A little investigation revealed this, which seems very much like what the woman is holding in the video.

Oh well.
Posted by Unknown at 4:03 PM No comments:

OK, this is just downright wierd.

I'm willing to admit right up front that this could be a fake, but take a few minutes and watch this.

Filmmaker and Cinephile George Clarke has recorded a YouTube video where he plays a snippet from the DVD extras on Charlie Chaplin's "The Circus". When you view the clip, you see a woman walking by holding something that looks for all the world like a cell phone to her ear.

The clip was from the Hollywood premiere of "The Circus" in 1928.

Again-this could be a fake. This could have an innocent explanation.

But I'll be darned if I can figure out what it is.

h/t Dvorak Uncensored, at dvorak.org/blog
Posted by Unknown at 1:40 PM No comments:

This will produce much snickering, as the Heat, with the renowned trio of LeBron James, Chris Bosh, and Dwyane Wade, three of the best players in the league, are supposed to, according to conventional wisdom, make mincemeat of their opponents, win every game by 30, and take the championship with ease.

The Heat are indeed a very good basketball team-no team with that much talent could be less than decent. And, after trailing by 15 at halftime, the Heat made a ferocious run, mostly fueled by James, to make the final score as close as it was.

But for now, the ancient Celtics showed the young folks how it was done, and it was great fun watching graybeards like Shaquille O'Neal cavort like their younger selves.
Posted by Unknown at 1:05 PM No comments: 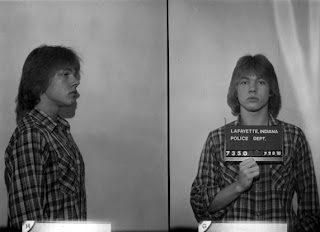 On the Paris Review's website, John Jeremiah Sullivan writes of his efforts to research a story on W. Axl Rose, the singer of Guns N Roses, for GQ Magazine. During the research, he managed to uncover this shot, of an 18 year old Rose being booked in his hometown in Indiana. As Sullivan puts it, "It’s the shots of him at eighteen that move me, though. He isn’t pretty yet, he hasn’t begun to think of himself as a rock star. He’s a boy-man, with a trace of fear in his pugnacious stare."

Rose is an interesting person, in so many ways. There was a time when I wanted to be him, like millions of other young men. Would I trade his path for mine? He's never seemed happy, despite all the money, fame, and worship. Then again, neither have I.