Not much, it turns out.

So I read the thing, and she's still deranged. Here's the part that gets me:

Yes, Hot Mama. We know that it was a true statement. The reason why everybody went bananas when you said that is not that it wasn't true, it was that YOU SAID IT AS IF THAT FACT MADE YOU QUALIFIED TO BE VICE PRESIDENT.
Posted by Unknown at 10:51 PM 6 comments:

I got a letter from my college today telling me that it had been 15 years since we graduated, and there were a number of options for where our "class gift" could be spent.

I nearly spit out my Diet Sierra Mist.

I hated my college. I graduated not because I was smart, but because I was stubborn. I can think of several thousand more worthy things to do with money than to give it to my college, including set it on fire, bury it in the woods, or grind it up and use it as mulch.

In summary, they can keep on waiting for my portion of the Class Gift to arrive.

A bon mot from Jeffrey Goldberg of the Atlantic Monthly: "In any case, trying to bring a racist to civilization is like trying to teach a dog to sing Verdi."
Posted by Unknown at 11:48 AM 7 comments:

...for the next couple of minutes, in my time zone, anyway, it is February 12, the 200th anniversary of the birth of two of the greats, Abraham Lincoln and Charles Darwin. One saved man from literal bondage, and one saved man from the mental bondage of ignorance.

Freedom FTW!
Posted by Unknown at 11:47 PM No comments:

Much as I hate to perpetuate memes... 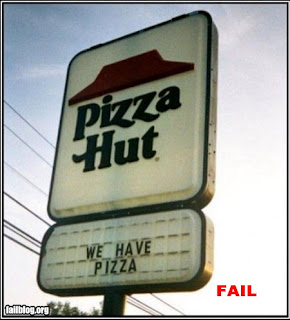 Check out failblog.org
Posted by Unknown at 5:30 PM 6 comments:

In keeping with the Blogger Code of Commenting on Things You Know Nothing About, I feel like I have let too many days go by without commenting about Nadya Suleman, the woman who Rachel Maddow charmingly calls "the woman with the octopus".

My overwhelming conclusion is that it really isn't any of my business, or your business, or anyone's business. It's one of these perfect storm American news stories that lets everyone feel oh so holier than thou about themselves.

It just kind of makes me nauseous. It's none of our business, and we should stop.
Posted by Unknown at 1:20 PM No comments:

Perhaps the height of irony.


A cake with the word "Fail" written on it.

I finished Amiga's "The White Tiger" yesterday-it was very good.

I'm planning to tackle Bolano's "The Savage Detectives" (again) next. I tried it once and it kind of stalled on me.

Along with the above story, talking about the pressures on modern teen girls, the Today Show also decided they needed to cover the Sports Illustrated cover model for the swimsuit issue.
Posted by Unknown at 9:57 AM 1 comment:

Peter Segal, of NPR's "Wait Wait Don't Tell Me", has started a meme on Twitter, everyone's favorite microblogging service, called the twitternovel. Summarize a novel in less than 140 characters.

Pointless self gratification FTW!
Posted by Unknown at 10:44 PM No comments:

In his "My Turn" essay, evangelical Richard Mouw, in a plea for tolerance, says, "I voted for the ban. As an evangelical, I subscribe to the 'traditional' definition of a marriage, and I do not want to see the definition changed. Does that mean I want to impose my personal convictions on the broader population? No. I celebrate the fact that we live in a pluralistic society, with many different worldviews and lifestyles. I support the democratic process and believe that civil society is at its best when people with different perspectives engage in a mutually respectful dialogue."


No one is asking you to change your definition of marriage. Your church can marry whomever it pleases. An atheist can't be married in my church. The rest of us are just asking that you keep your views on marriage to yourself.

You celebrate pluralism, I guess as long as that pluralism doesn't make you feel icky.

This is what I cannot understand about gay marriage opponents-what is it about anyone's marriage, including mine, that has any impact on you at all? Ever?
Posted by Unknown at 2:24 PM No comments: